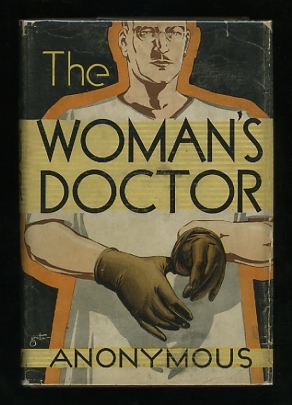 [ex-rental library book (Vierstahler Bros., on Walnut St., city unknown), marked by only a single stamp on the ffep, some soiling to fore-edge and bottom page edges, binding a little weak (but no cracks or splits), light shelfwear; jacket is edgeworn, with small tears and a teensy bit of paper loss at several corners, a bit of smudging/creasing in front panel, moderate soiling to rear panel]. According to the jacket blurb of this book -- "so startling, so new, that is is certain to make literary history" -- both men AND women would find out more about the mysteries of the female body than they ever imagined. "The secret side of womanhood, most of it dark even to the women themselves, is revealed under the searching kindly inquiry of the consultation-chamber and the relentless probing insistence of the operating-room." Despite the singular title, the book is actually structured around the experiences of two doctors, who eventually come into conflict when one is accused of having facilitated an abortion. The setting is specified as Toronto, which is a tipoff to the identity of the author: one Sol Allen, a Canadian writer whose 1929 novel "They Have Bodies" (published in the U.S. under the name "Barney Allen") has been cited as an almost unique early example of modernist Canadian fiction. (And, interestingly, he also published two novels later, as "Sol Barney Allen" -- apparently his true, full name -- that would appear to cover the same ground: "Toronto Doctor" (1949) and "The Gynecologist" (1965).) There's an extensive glossary of medical terms at the end of the book, which permits the author to avoid the use of "repellent terms." And speaking of relentless probing, by the way: could anything be much scarier than that jacket illustration?