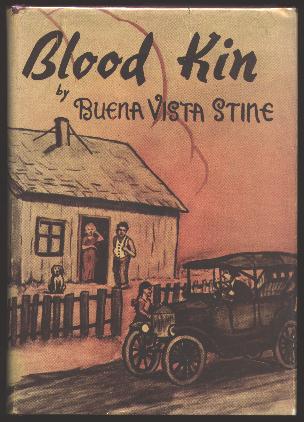 [nice tight copy, very minor soiling to top edge but no significant wear; jacket bright and clean, with a trace of wear at several corners, a couple of very tiny tears/chips along top edge]. The first of several novels by this midwest-born, L.A.-based author, "active in club life" and a former "motion picture critic for 'Hollywood Lowdown'" (not one of your major trade papers). The book presents "the living, breathing story of the Pearson family, told intimately and with brutal frankness from the personal viewpoint of the chief character, Florrie Pearson, the youngest. The mad, unsavory escapades of her blood kin are lived through in the book with stirring realism. Early experiences, the frustration of abject poverty, turbulent times in America during 1917-1942, and last but not least, their hot blood mixed with a strain of Cherokee Indian, are among the causes that lie back of their sinful guiltiness, as Florrie explains it." (Last but not least, indeed: as the author explains in her 4-page(!) foreword, "[the family's] problem was one of a common handicap shared by their particular blood kin, the problem of 'bad blood,' or blood in which racial tendencies were said to be 'bad.' Also, the frustration that comes with poverty.") But lest you think you've stumbled into a midwestern Tobacco Road, the author also assures us that "at no point does the book descend to the stark vulgarity sometimes masquerading under the pose of being merely 'brutal frankness.' But neither do I, as an honest author, make the unpardonable mistake of prudish understatement where merciless realism is called for by the story." So there you go: brutal frankness (but not "merely" thus), merciless yet stirring realism, not an ounce of prudish understatement (which as we all know is unpardonable), but rather explicitly racist overtones (which apparently are OK). Got it?