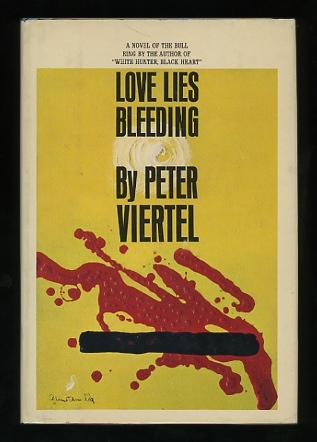 [nice clean copy, very light shelfwear, shallow dent at top of rear cover; jacket is clean and attractive despite one short and slightly ragged closed tear at bottom of front panel and another at top of rear panel]. My God, did any writer ever want to be Hemingway as badly (and baldly) as Peter Viertel? His 1992 memoir, "Dangerous Friends: At Large with Hemingway and Huston in the Fifties," while a fascinating read, is also more than occasionally a little sickening for the degree of sycophancy it displays towards "Papa." Anyway, it's not surprising that he waited until the old man was in his grave before coming out with his own Serious Bullfighting Novel -- I doubt he could have handled Hemingway's reaction to the mere fact of it. Many of Viertel's obituaries pointed out that critics regarded his novels (especially this one) were "Hemingwayesque in tone" -- no, duh! (All of which is not to say that it's not a good novel -- it is, actually.)