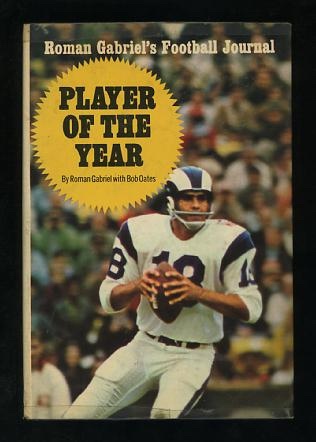 By: Gabriel, Roman, with Bob Oates

[solid copy, a bit of wear to covers at top and bottom edges, light offsetting to endpapers, light soiling to top page edges; jacket lightly soiled and spotted both internally and externally, and a previous owner saw fit to "reinforce" it with scotch tape along the top and bottom edges]. (B&W photographs) INSCRIBED ("To John") and SIGNED by the author on the ffep. Gabriel, the All-Pro quarterback for the Los Angeles Rams -- (an interlude, while you try to remember when the Rams played in L.A., or when any pro football team played in L.A., for that matter) -- "opens his diary and invites you to see the inner workings for a top man on a top team hot on a winning streak that looks as though it will go on forever." Yeah, well, it didn't: the book chronicles the Rams' 1969 season, which was humming along just fine until they lost the last three games of the regular season and their first playoff game, before administering a 31-0 stomping to the Dallas Cowboys, back in the days when the two playoff losers got to square off for third place. Signed by Author