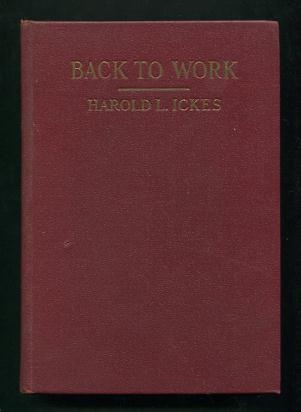 Back to Work: The Story of PWA

(no dust jacket) [solid copy, a couple of light spots on spine, minor soiling to top pages edges; internally clean, binding strong]. (B&W photographs) FDR's Secretary of the Interior tells of the accomplishments of the PWA (Public Works Administration) in its first two years. Part of the first wave of Roosevelt's New Deal programs, its initial two-year budget of $3.3 billion was distributed to more than 15,000 individual construction projects, including airports, dams, highways, bridges, schools, hospitals and public housing. One of the key figures in the implementation of the New Deal, Ickes was one of only two of FDR's original Cabinet members to remain in office throughout the President's four terms in office. (PWA differed from its similarly-named rival agency, the WPA, in that the PWA assisted with funding and administration of projects which were actually carried out by private construction companies, whereas the WPA hired (and paid) people directly to work on smaller-scale projects in cooperation with local governments.)

Title: Back to Work: The Story of PWA

Back to Work: The Story of PWA