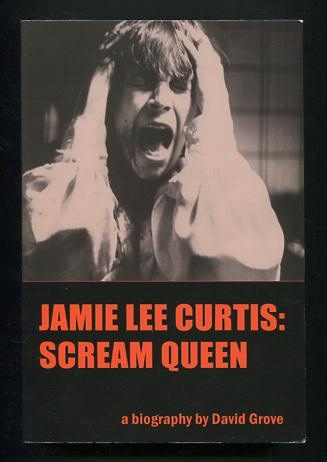 [generally a nice clean copy, very slight dog-earing to corners of front cover, minor scrunching to bottom corners of a few pages in the middle of the book]. Trade PB (B&W photographs) Billed as a "comprehensive biography" of Curtis, but actually just an in-depth (and I mean really in-depth) examination of a relatively small part of her career, i.e. her three-year reign (if that's the right word) as "the ultimate scream queen" in a string of six low-budget horror films, beginning with HALLOWEEN in 1978 and ending with HALLOWEEN II in 1981. Oh, there's some background about growing up as a Hollywood kid, and the author wraps up with about 40 pages (out of an almost 500-page book) dealing with her entire "post-scream queen" career -- and even much of THAT is devoted to the two lame-o HALLOWEEN follow-ups, made in 1998 and 2002. (There is, at least, a complete JLC filmography, including made-for-TV movies.) The author can't be faulted for his "intense research" (hundreds of interviews, etc.), and I think it's safe to say that nobody will ever have to do another book on this particular topic. (For the record, the other four films whose production histories are recounted in great detail are THE FOG, PROM NIGHT, TERROR TRAIN and ROADGAMES -- per the cover blurb, "genre classics" one and all.)