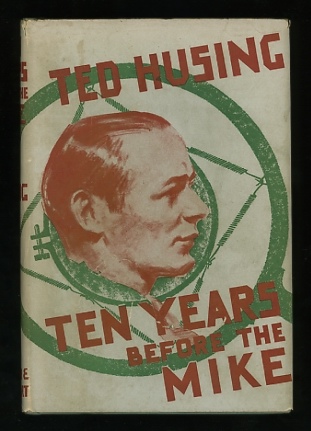 Ten Years Before the Mike [*SIGNED* to Mark Hellinger]

[book is solid and clean, with some slightly uneven fading to the cloth; jacket lightly rubbed/soiled, with a fairly unobtrusive scratch on the front panel that has resulted in two tiny holes]. (B&W photographs) INSCRIBED with a bit of blank verse (to noted columnist Mark Hellinger) and SIGNED by the author on the ffep; inscription dated in the author's hand November 4, 1935. For anybody who listened to the radio during the pre-World War II era -- by which of course I mean virtually every man, woman and child in America -- Ted Husing's voice was a ubiquitous presence in their lives. He covered news and political events (he was the original voice of the March of Time), served as an announcer/straight man for George Burns and Gracie Allen, voiced commercials, and most of all, did sports -- boy, did he ever. From the network's founding in 1927 until he departed in 1946, he was CBS's star performer in that realm -- not just for football and baseball (he did seven World Series), but also boxing, track and field, tennis, golf, horse racing, the Indianapolis 500 and the Olympic Games -- and it's not stretching a point too much to say that Husing pretty much invented the modern style of colorful and opinionated play-by-play sports commentary. Immensely popular with the listening public, he could also be difficult and controversial: he was once barred from covering Harvard's football games after using the word "putrid" to describe one of its star player's performances (an incident he discusses in Chapter XI), and baseball czar Judge Kenesaw Mountain Landis laid a similar banishment on him for his on-air criticism of the umpires during the 1934 World Series. Signed by Author

Title: Ten Years Before the Mike [*SIGNED* to Mark Hellinger]

Ten Years Before the Mike [*SIGNED* to Mark Hellinger]