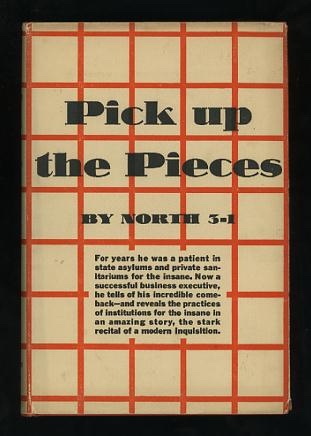 Pick Up the Pieces

[nice clean copy with minimal shelfwear, small light scuff mark to top edge (noticeable as whiteish mark on black topstain), one-time owner's signature on ffep, bookseller's label (Lewis & Sons, Denver) on rear pastedown; jacket shows light soiling, a few tiny tears, very slight paper loss at top of spine]. "For years [the author] was a patient in state asylums and private sanitariums for the insane. Now a successful business executive, he tells of his incredible comeback -- and reveals the practices of institutions for the insane in an amazing story, the stark recital of a modern Inquisition." Owen, a one-time newspaper reporter and editor who got into the ad/pub game following his service in the First World War, eventually became the editor/manager for the "Hotel Red Book" and publicity director for the American Hotels Association. It's unclear from his book exactly when his asylum interlude(s) took place -- he just plunges right in, and takes the reader along for the ride -- but it's perfectly clear, as he puts it himself, that he's "not insane....in the ordinary sense. I am a drunkard."

Title: Pick Up the Pieces

Pick Up the Pieces