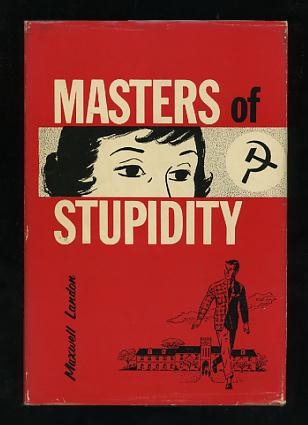 [slight wear to book at ends of spine and bottom edge, very light soiling to bottom edge; jacket lightly soiled, a bit wear at edges and corners, a couple of tiny edge-tears]. INSCRIBED at great length and SIGNED by the author on the ffep (actually signed "Ruth and Max"). A first-person account of the author's experiences in Los Angeles, circa 1944-1952; a WWII vet, he worked at various odd jobs while also attending film and theatre classes at USC and UCLA under the G.I. Bill. The problem was that every time he turned around, he saw Red: the phrase "a communist under every bed" could have been invented just for him. On the 20th Century-Fox lot, a flirtatious secretary advises him to check out the "People's Educational Center" in Hollywood; on the USC campus he's hit on by a couple of peace-petition girls; moving into an apartment near Muscle Beach in Santa Monica, he finds himself (or so he imagines) at the veritable storm center of a communist cell, or something. The whole thing is almost too ridiculous for words, but unfortunately that doesn't stop him from giving the reader plenty of them, in a nearly incoherent mash-up of his somewhat obnoxious personality, his utter lack of writing ability, and his almost sub-moronic level of political knowledge/sophistication. (He seems to have learned all he needed to know from a 25-cent U.S. Government booklet called "The History of Communism." I kept thinking of Thelma Ritter as "Moe" in Sam Fuller's great film PICKUP ON SOUTH STREET: "What do I know about commies? Nothing. I know one thing. I just don’t like ‘em.”) He is also so thoroughly self-centered that he utterly fails to give us much in the way of local color about Southern California, and he's such a bad writer that it's frequently unclear just HOW he figures out that all these people are dirty commie rats. (He has a habit of addressing himself as "Maxie," and of wrapping up narrative episodes with phrases like "All right." or "That's all there was to that.") And really, is there anything more painful than aggressively bad writing by someone trying to make a point on nearly every page about how much wiser/cooler/tougher he is compared to most of the pathetic excuses for human beings that surround him? Give me an articulate, intelligent commie rat any day. Apparently the author's only book, for which the world should be thankful. (I suspect the book's title, by the way, is some kind of homage to J. Edgar Hoover's tome "Masters of Deceit," published in 1958; but who cares, really?) Signed by Author