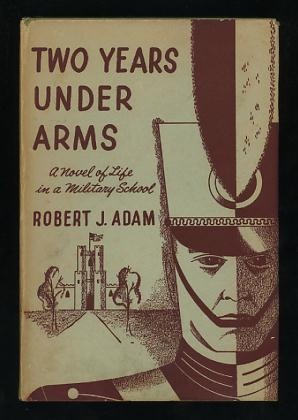 Two Years Under Arms: A Novel of Life in a Military School

[moderate shelfwear, light fading to cloth at edges, light discoloration in gutters; jacket a little edgeworn, spine is browned with some minor staining, a few tiny nicks here and there]. The author, a native of Dunlap, Kansas, and a then-resident of Lyons, Kansas (about 110 miles to the west, in case you were wondering), novelizes his experience at military school -- by all accounts the sort of thing you never quite get over, although it doesn't necessarily obligate you to write a book about it -- to present a "vivid and authentic account of .... the hazing, the maneuvers, the sports, the youthful rebellion, and all the other countless facets of cadet life." Like many vanity-romans-a-clef, the author effectively anonymizes the actual locations of the action -- his protagonist hails from "Centerville" (but the description of the town doesn't match Centerville, Kansas) and attends "Sterling Military Academy in Longmont, Missouri." (There never has been either a military school or a Missouri town by those names, near as I can tell.) The novel is set mostly during 1934 and 1935, and although the locus is primarily the doings at the school itself, there are at least some references to what was going in Depression-era America, and a visiting lecturer even speaks of the rise of Hitler. (There's also a kind of amusing passage in which the protagonist take a girl to see the movie LIMEHOUSE BLUES (Paramount, 1934), which he dismisses as "a morbid piece [with] many sordid, undesirable scenes.") All in all, it presents a pretty balmy picture of life in a military academy -- even the "hazing" referenced above doesn't amount to much more than a sergeant who yells a bit and calls the cadets "the sorriest bunch of recruits I've ever seen." It does kind of leave you wondering, though, if the author -- especially since the book was published smack-dab in the middle of the McCarthy Era -- quite knew what he was doing when he named his protagonist "John Reed."

Title: Two Years Under Arms: A Novel of Life in a Military School

Two Years Under Arms: A Novel of Life in a Military School