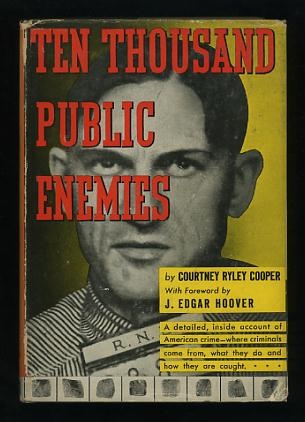 [nice tight copy with only minimal wear, small piece torn away at top corner of one page (no text affected); jacket a bit worn along top and bottom edges, small tear at bottom corner of front panel, a little bit of scuffing to spine]. (B&W photographs) "An inside picture of the underground workings of crime in the United States and a description, with hundreds of hitherto unknown details, of the workings of the forces of law and order seeking to detect and capture our 10,000 public enemies." And of course the anointed head of said "forces of law and order" at the time was FBI Director J. Edgar Hoover, who in his Foreword to this volume singles out Cooper as "one of the best informed writers on this subject in America." And indeed he may well have been: a former newspaperman (and before that a circus clown), he published over thirty books during his career, many on criminous subjects. This volume was the first of three that Cooper turned out between 1935 and 1938 that specifically touted the crime-fighting efforts of Hoover's FBI, at a time when the agency had not yet consolidated its position at the top of the domestic law-enforcement heap; it was also rumored that he was Hoover's ghostwriter for various magazine articles and the 1938 book "Persons in Hiding." (Hoover, in his Foreword, calls for "absolute co-ordination of Federal, State and local enforcement agencies." He disingenuously claims that his work "does not signify an attempt to usurp the law-enforcement powers of State, County, or City," while at the same time opining that "day by day, crime is laughing at localities.") Cooper was given unprecedented access to FBI files under Hoover's benevolent eye, and the list of nefarious notables whose mug shots and cards are reproduced in the book reads like a Who's Who of Depression-Era gangsters: Al Capone, "Pretty Boy" Floyd, Clyde Barrow, "Doc" Barker, Alvin Karpis, John Dillinger, "Baby Face" Nelson, and "Machine Gun" Kelly are all here, along with various lesser louts. Cooper died in 1940 under questionable circumstances: he was found hanged in the closet of a New York hotel room, and although his death was ruled a suicide, apparently his FBI file (how appropriate!) contains information indicating that he was murdered.