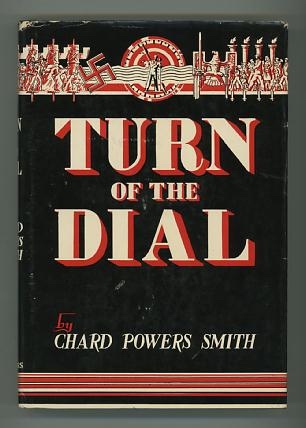 Turn of the Dial

[nice clean copy with minimal shelfwear; jacket shows some wear at spine ends and corners, light scuffing to front panel, one small and unobtrusive closed tear at top of rear panel]. Novel backgrounded against the rise of a radio station in a small American city, from its inception in 1936 to the first year of World War II. The station's owner, who is also the editor of the city's newspaper (uh-oh, can you say "vertical integration"?), had "made up his mind about Hitler long before many Americans did [and] tried to use his radio station to broadcast the truth as he saw it." This, of course, brings him a lot of trouble from various quarters, ranging from business elements worried about the German marketplace, to somewhat more sinister reactionary (not to say proto-fascist) elements personified by Judge Asa Savage, "who would rather hate Roosevelt than Hitler." Review copy, with original publisher's slip laid in.

Title: Turn of the Dial

Turn of the Dial