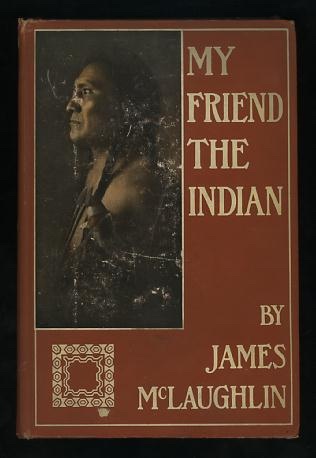 My Friend the Indian

(no dust jacket; photographic paste-on front cover) [moderate wear to extremities, all corners bumped to some extent; generally a solid clean copy, with some scuffing to the photographic portrait on the front cover]. (B&W photographic plates) A memoir by this Canadian-born ex-blacksmith who received his first appointment as a U.S. Government Indian Agent in 1876, who writes with some compassion of "what I know of the Indian, of his losing struggle for an existence according to his own ideals, of his manner of living, mode of thought, habit in action and repose, and of the things that have happened to him on the long trail he has traveled..." McLaughlin is best-known for his work on the Sioux reservation at Standing Rock (in the Dakota Territory) during the 1880s, and particularly for his conflict with the great chief Sitting Bull which resulted in the latter's death in 1890. In the context of his age, McLaughlin was a fairly enlightened soul, who respected the culture of the "red man" and was known to have good relationships with many tribal leaders. In his book, he makes a point of "tell[ing] the Indian's side of many a disputed event" -- devoting, for instance, one of the three chapters discussing the Battle of the Little Big Horn to "Mrs. Spotted Horn Bull's View of the Custer Tragedy" -- and professed to be untroubled by any "contention....that I have written from the Indian rather than from the white man's point of view." Whether he was similarly untroubled by his own role in the government's treatment of Native Americans is more difficult to say -- although his final chapter, "Give the Red Man His Portion," presents a scathing summary of the manner in which the Indians had been mistreated by the white man, coupled with an impassioned plea to release the huge amount of money then being held in trust for the Indians in the U.S. Treasury, so that they may have a chance to determine their own destiny instead of being consigned to a "pauperizing" dependency on government support. McLaughlin was promoted in 1895 to Inspector for the Indian Department and the Department of the Interior, and continued to work there until his death in 1923. Most of the photographic portraits of various chiefs and warriors in the book (including Sitting Bull, Rain-in-the-Face, Crow King and Chief Joseph) are credited to D.F. Barry.

Title: My Friend the Indian

My Friend the Indian