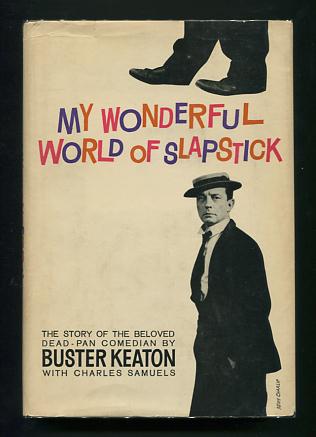 My Wonderful World of Slapstick [*SIGNED*]

By: Keaton, Buster, with Charles Samuels

[spine slightly turned, front hinge unobtrusively reinforced by a professional paper conservator, otherwise just a bit shelfworn at the bottom extremities; jacket slightly toned at spine, small chip at top of spine, rear hinge split but professionally repaired, overall a clean and attractive example of this easily-worn jacket]. (B&W photographs) INSCRIBED and SIGNED by Buster Keaton on the verso of the half-title page (facing the title page). The inscription reads: "To Fritzie / My Queen, / From me, The King, / Buster." (The inscribee was actress Fritzi Burr, and the inscription is a reference to their joint appearance in the U.S. touring company of "Once Upon a Mattress" in 1960.) Billed as the "intimate autobiography" of the great comedian/filmmaker, it's one of those memoirs that manages to be both enchanting and infuriating, written as it was back in the day when many Hollywood autobiographies were unencumbered by such niceties as fact-checking. Still, as the personal testimony of one of the cinema's great artists, it more than deserves its inclusion in the noted bibliography "100 Books on Hollywood & the Movies." And to say that Buster Keaton inscriptions are uncommon is an understatement; although he was not illiterate -- a ridiculous notion floated by one of his less astute biographers -- he certainly was undereducated (he was being knocked about onstage by his father from the age of three, fer chrissake), and written documents of any sort in his hand are about as common as his on-screen smile. His art was brilliantly intuitive, and will endure for precisely that reason -- but a man of letters he was not. [Note that a cracked front hinge on this book has been unobtrusively repaired and reinforced by a professional paper conservator, and a similar repair performed on the rear hinge of the jacket.] Signed by Author

My Wonderful World of Slapstick [*SIGNED*]