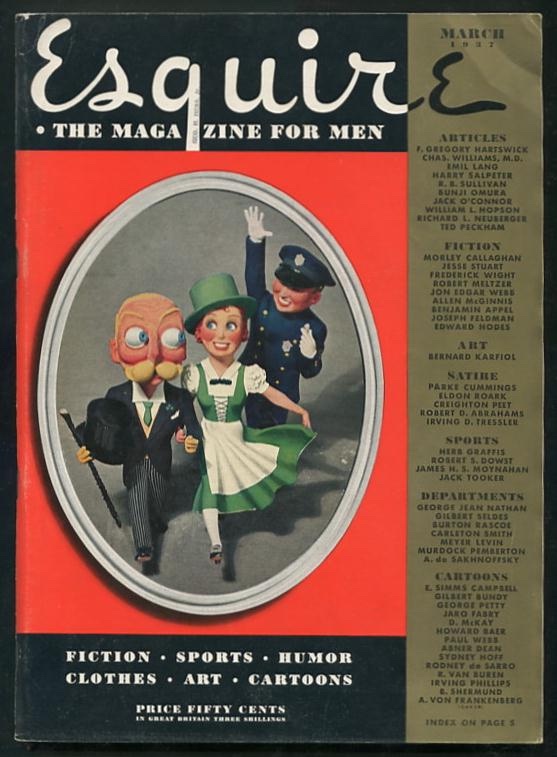 [nice clean copy, binding (staples) firm, a bit of wear at spine ends, bumping and slight crinkling at upper right corner, one-time owner's name discreetly rubber-stamped in "q" of title on front cover]. (photographs, cartoons, ads, etc.) One of the harder-to-find 1930s issues of "The Magazine for Men," despite its general lack of household-name contributors (which is to say no Fitzgerald or Hemingway), due in large measure to its inclusion of the first appearance of Pietro di Donato's "Christ in Concrete," his story of Italian-American construction workers. It's accompanied by a deliriously laudatory editorial note about the stellar qualities of the story itself and its "almost incredibly talented" author, whose first published writing this was. The editors admit that they had to print the story in an edited (and expurgated) version, due to the unsuitability of some of its language for a general-circulation magazine, but their enthusiasm for it led them to take the unusual step of offering the full-length version as a separately-published softcover book, available by sending a quarter to the Esquire offices. The author later expanded the story to novel-length, for publication by Bobbs-Merrill in 1939. Also in this issue are short stories by Benjamin Appel ("Property Protected," a tale about strikebreakers), Morley Callaghan ("Rendezvous with Self") and Jesse Stuart ("One of God's Oddlings"). There's a lot more, of course -- there always was with Esquire -- including the usual run of full-page, moderately-risque cartoons (by Petty, Howard Baer, Sydney Hoff, Abner Dean, etc.) and George Hurrell photographic glamour portraits of Barbara Stanwyck and Sonja Henie.