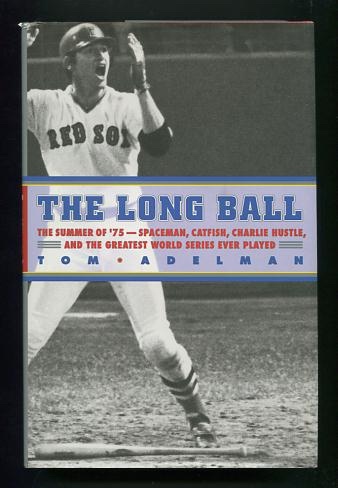 The Long Ball: The Summer of '75 -- Spaceman, Catfish, Charlie Hustle, and the Greatest World Series Ever Played

[faint smudge on bottom page edges, tiny dent in bottom edge of front cover; jacket has minor wear at spine ends, one itty-bitty tear at top front hinge]. (B&W photographs) "The story of that star-studded [1975] season and the heart-stopping Series that followed. It is packed with the most colorful players and managers of the modern era, among them Reggie Jackson, Pete Rose, Billy Martin, Carl Yastrzemski, Sparky Anderson, Carlton Fisk, Catfish Hunter, Steve Garvey, George Brett, Bobby Bonds, Johnny Bench, Bill 'Spaceman' Lee, Fred Lynn, Ken Griffey, Jim Palmer, Rickey Henderson, and many others. And it is written like no other sports book before it, a spectacular reinventing of the genre by a writer who understands heartbreak as well as he understands batting averages." (A guy from Boston? Yeah, I guess he knew a little bit about heartbreak, at least in 2003. It got better the following year, I understand.)

Title: The Long Ball: The Summer of '75 -- Spaceman, Catfish, Charlie Hustle, and the Greatest World Series Ever Played

The Long Ball: The Summer of '75 -- Spaceman, Catfish, Charlie Hustle, and the Greatest World Series Ever Played