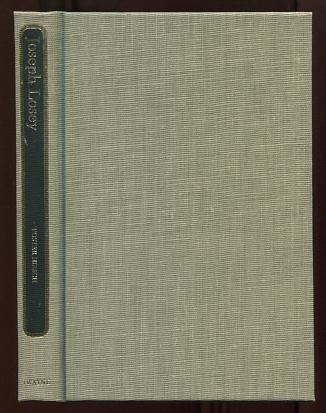 (no dust jacket, as issued) [nice clean copy, appears brand-new, would rate "Fine" but for a faint musty smell which will likely dissipate over time]. (Twayne's Theatrical Arts Series) Series (B&W photographs) Critical survey of the film work of this Wisconsin-born stage and film director, who worked in Hollywood until the blacklist forced him out in 1951, and went on to do his most notable work overseas (THESE ARE THE DAMNED; THE SERVANT; ACCIDENT; THE GO-BETWEEN; etc.). Includes a chronology of his life, a selected bibliography and a filmography (all typical features of this well-regarded series); appended to the latter is a special note on Losey's 1979 wonderful film DON GIOVANNI, which had its American premiere late in 1979, too late to be assessed within the main body of the book. Most of these highly-regarded Twayne publications on film directors went to libraries, and are thus difficult to find as clean, unmarked books.