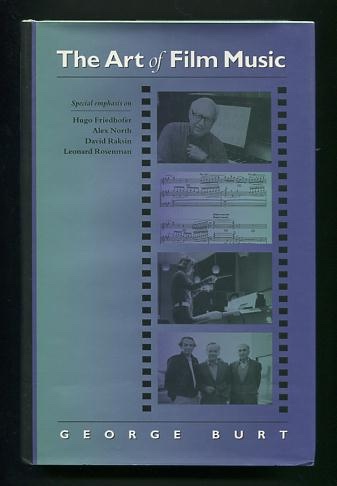 The Art of Film Music [*SIGNED*]

[lightly bumped at bottom corners (both book and jacket), no other significant wear]. (musical examples) INSCRIBED ("Dear Richard / With admiration / and much gratitude for / your help") and SIGNED (first name only) by the author on the ffep. The author, a music professor and film composer, "explores music's significant role and powerful effect by analyzing several scenes in classic films produced from the 1930s through the 1980s. His thorough examination of the practical and aesthetic aspects of scoring a film is richly illustrated by the personal perspectives of such renowned composers as Hugo Friedhofer, Alex North, David Raksin, and Leonard Rosenman." Among the films whose scores are discussed in detail are THE BEST YEARS OF OUR LIVES (Friedhofer), LAURA (Raksin), EAST OF EDEN (Rosenman) and WHO'S AFRAID OF VIRGINIA WOOLF? (North). The inscribee was director Richard Fleischer, and the music for several of his films (including FANTASTIC VOYAGE, COMPULSION and TORA! TORA! TORA!) is discussed in the text. Signed by Author

The Art of Film Music [*SIGNED*]