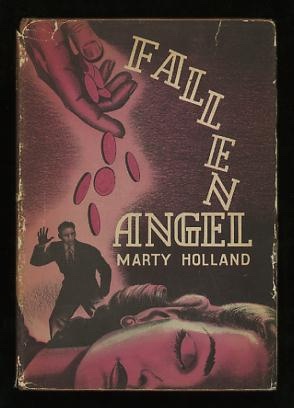 [lightly worn copy, with some faint staining to the front cover, short closed tear at bottom of title page; jacket edgeworn, a few small tears, some minor paper loss at both ends of spine (all text on spine still present), internally tape-repaired (with modern tape, at least) at front foldover]. Very scarce novel which served as the basis for one of the best of Otto Preminger's early films (and a worthy follow-up to his classic LAURA). The first of five novels by this author, who apparently also dabbled in screenwriting without any notable success. (The only other film credit I've been able to uncover for her was a story credit for the 1950 noir THE FILE ON THELMA JORDON.) Interestingly, the front jacket flap bears a boxed notice to "WATCH FOR THE MOVIE," indicating that the book was "snapped up hot off the typewriter by Twentieth Century-Fox." Dana Andrews was already announced as the star of the forthcoming film version in late September 1944, about seven months before the book hit the shelves, with the finished film finally going into release in December. Andrews' co-stars were Linda Darnell (sexy girl) and Alice Faye (nice girl), the latter making a sort of "comeback" (as well as a change of pace, in a non-musical role) after being absent from the screen for nearly two years. Ironically, however, it ended up being Faye's swan song as a major star after she got into a dispute with studio head Darryl Zanuck over his decision to cut down her role in the picture in favor of Darnell's.