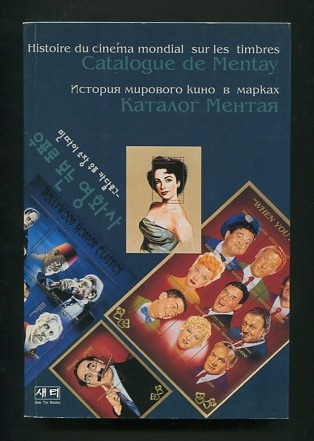 [nice clean copy, very light handling wear, short diagonal crease at bottom right corner of front cover]. (color reproductions) A "history of world cinema on stamps," apparently the catalogue of the personal collection of movie- and entertainment-themed stamps assembled by the author, a Kazakstan-born actor who had at the time appeared in 47 films, primarily Russian, but had also been a stamp collector for thirty years (it sez here, in French), exercising his dual passion for both cinema and philately. I don't know whether this guy is world-renowned in stamp-collecting circles or not (there's something in his bio text about having received five gold medals for something or other), but he sure has put together an impressive collection of international stamps featuring movie and TV stars, film graphics, etc. (the majority of which are related to American or British movies). The book's text and captions are in Russian, French and (I believe) Chinese, but lack of fluency in these languages will not inhibit your enjoyment of the several thousand full-color images reproduced in the book's 374 pages.