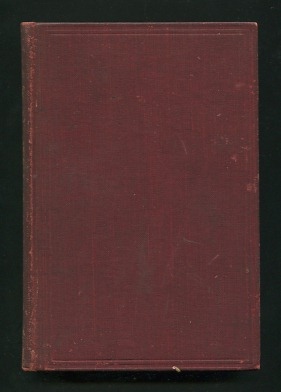 The Negro in America and The Ideal American Republic

(maroon cloth, gilt stamping on spine; no dust jacket) [moderate soiling to exterior, some mottling to spine cloth (gilt lettering still readable), front cover opens freely but hinges and binding still intact; pencilled note (non-authorial) on front pastedown about the book's having been presented to the Ladies Missionary Society at a Baptist Church (city not noted) in 1902]. The author, whose full name was Thomas Jefferson Morgan (1839-1902), states: "My grandfather was a slaveholder. My father was an Abolitionist. While a student in college I learned to believe in the doctrine of the brotherhood of man and to hate slavery. During the war [Civil War] I organized four regiments of Negro soldiers; was colonel of the Fourteenth U.S. Colored Infantry; organized and comanded the First Colored Brigade of the Army of the Cumberland, and participated in numerous engagements with both white and black soldiers. Since the war I have had an abiding and growing interest in the progress of the Negroes. For more than five years, as the executive officer of the American Baptist Home Mission Society, under whose auspices an extensive educational and missionary work has been carried on for the Negroes, I have had occasion to study their conditions critically, to make frequent public addresses, and to write numerous essays. Some of these are now printed together with the hope that they may be serviceable as well as interesting." Essay titles include: Slavery and Freedom; Negroes in the Civil War; The Higher Education of Negro Women; Religious Life Among the Negroes; Negrophobia; The Negroes Under Freedom.

Title: The Negro in America and The Ideal American Republic

The Negro in America and The Ideal American Republic