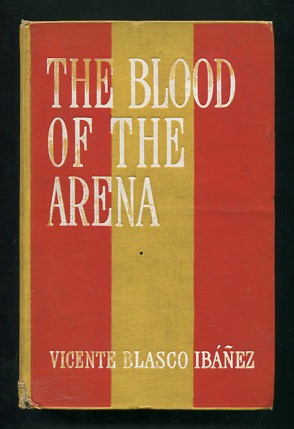 The Blood of the Arena

By: Blasco Ibañez, Vicente (translated from the Spanish by Frances Douglas)

(no dust jacket) [moderate overall wear and external soiling, dust-soiling to top page edges, light bumping at several corners, one-time owner's name on ffep, bottom half-inch of spine cloth looks like it might have glued back in place after having been ripped a bit at the bottom spine corners]. (color frontispiece, 3 color plates) The first American publication of Blasco Ibañez's classic novel of the rise and fall of a great matador, later the basis for two outstanding Hollywood films, both using the more marquee-friendly title BLOOD AND SAND: a 1922 silent version starring the gorgeous Rudolph Valentino, and the 1940 Technicolor production directed by Rouben Mamoulian for 20th Century-Fox, starring the even-more-gorgeous Tyrone Power. Originally published in Spain in 1908 as "Sangre y arena"; following this edition, it next saw print in the U.S. in 1919, as "Blood and Sand," in a translation by Mrs. W.A. Gillespie that was designated as the "Authorized American Edition" -- implying that this McClurg printing may have unauthorized. (This is mere speculation on my part, not based on deep research.)

Title: The Blood of the Arena

The Blood of the Arena