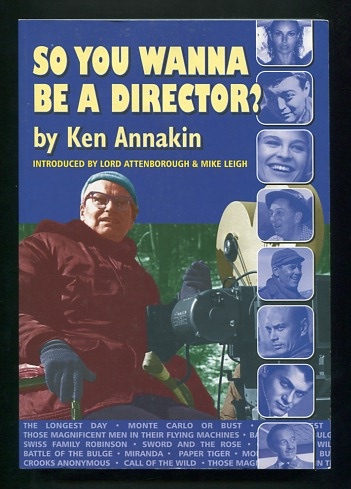 So You Wanna Be a Director? [*SIGNED*]

[slight dog-earing to corners of rear cover, a bit of scuffing and minor creasing to covers, light soiling to page edges, small gouge in bottom edge]. Trade PB (B&W photographs) INSCRIBED generically ("Best Wishes") and SIGNED by the author at the upper corner of the ffep. Memoir by the veteran British director, who (per the cover blurb) "has directed, written and produced over fifty feature films in Africa, India, Malaysia, Scandinavia, China, Europe and America," and to judge from the all-star testimonials (Mike Leigh, Charles Bronson, Robert Wagner, Dorothy McGuide, Julie Christie, Richard Attenborough, etc.) was quite a popular fellow. Yet pick out a genuine classic from among his long filmography. BATTLE OF THE BULGE? THOSE MAGNIFICENT MEN IN THEIR FLYING MACHINES? That's about as good as it gets, and although there's a fair bit of solid entertainment that bears his name, calling him "one of the greatest international film directors" (as the cover blurb does) is, sorry, more than a bit of a stretch. Signed by Author

Title: So You Wanna Be a Director? [*SIGNED*]

So You Wanna Be a Director? [*SIGNED*]