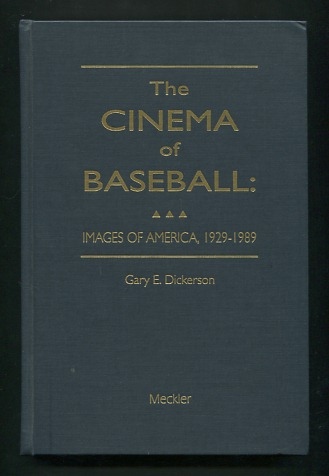 (no dust jacket, as issued) [nice clean book, essentially as-new, with the teensiest bumping to the top corners]. (Baseball and American Society, 14) Series (B&W photographs) Sociocultural survey of baseball movies as a reflection of American society from the Depression Era through the end of the 1980s. The book had its origins as the author's Ph.D. dissertation, as evidenced by its more-than-occasional lapses into pedantry. ("The Bad News Bears is primarily a commentary on the value of youthful tendencies over adult tendencies.") Films treated in the greatest depth are PRIDE OF THE YANKEES, THE STRATTON STORY, THE BAD NEWS BEARS, THE NATURAL and FIELD OF DREAMS. Includes bibliography and a chronological list of baseball films (titles only) released from 1929 through 1989.