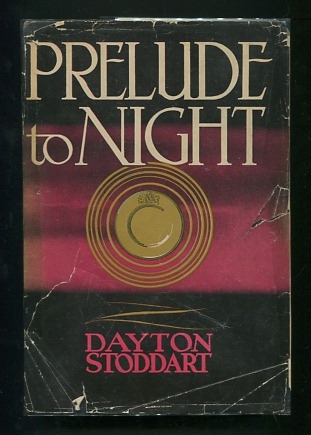 [book is in decent but not spectacular condition, with a small dent in the top of each cover, a touch of wear at all corners, slight bumping to top corners, vintage bookseller's label (Newbegin's, San Francisco) on rear pastedown; jacket is a bit of a mess, with significant paper loss at both ends of spine, numerous other tears and small chips, etc.]. The only novel by this one-time newspaper reporter and theatrical press agent, the saga of the "rise [of] a poor Boston youth to wealth and power in New York, via Harvard, snobbery, and magnetic ruthlessness," set against "the panorama of American moods and life for 40 years." Notable as the source for Edgar Ulmer's 1948 film RUTHLESS (regarded by cinema buffs as a sort of Poverty Row CITIZEN KANE), it's also a tangential Hollywood novel, as one of the protagonist's associates is "Sanford Levy (born Sam Levy), Hollywood magnate." The jacket blurb quotes Theodore Dreiser, proclaiming it "brilliant," but without further elucidation. Stoddart, per his rear-jacket-panel bio, had been a newspaper reporter in Philadelphia and New York from 1914-1917, served with the Royal Flying Corps in World War I, and subsequently (in addition to his press-agentry) contributed much short fiction to the leading magazines of the day.