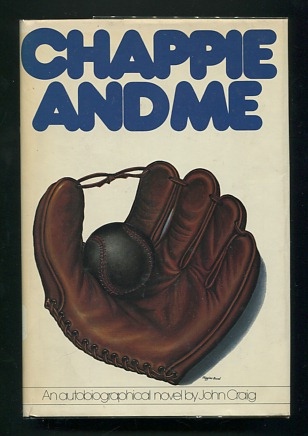 Chappie and Me: An Autobiographical Novel

[presentable ex-library book, minor wear, with small library stamps on ffep, all page edges, and in margins of occasional pages; two "DISCARD" stamps on ffep, inked call number on copyright page, tape marks on front and rear boards; the jacket is quite nice apart from some slight yellowing of the spine except the small spot where the call number label has been removed]. Baseball/coming-of-age novel, set in 1939, about a young white first baseman who dons blackface in order to go barnstorming through the Midwest (both in Canada, where the narrative begins, and the U.S.) as a member of a Negro Leagues team, "Chappie Johnson & His Colored All Stars." The author acknowledges that the book is a memoir in the form of a novel, stating in a brief preface: "In essence, this is a true story. I know because I was there. But it is told under the novelist's license to shape time and place to his purpose. Let it be the more real for that." Its primary value, indeed, is likely as an eyewitness account of the day-to-day lives of African-American ballplayers of that era; in fact, the great majority of the book takes place off the playing field, as the team makes its way through one tank-town after another, dealing with often unpleasant racial and economic realities. (George "Chappie" Johnson, by the way, was an active player from 1896 through 1921, and continued as a manager through 1939.) A native of Peterborough, Ontario, Craig wrote a number of autobiographically-informed novels, and often dealt (as here) with issues of social taboo and racial prejudice. This book, called his "finest achievement" by The Canadian Encyclopedia, was also adapted into a play (co-written by the author), "Ain't Lookin'," in 1981.

Title: Chappie and Me: An Autobiographical Novel

Chappie and Me: An Autobiographical Novel