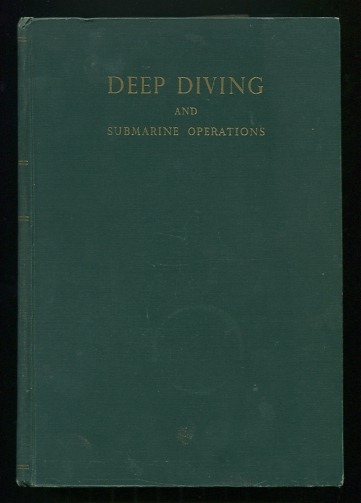 (no dust jacket) [moderate shelfwear, faint beverage-ring stain on front cover, slight damp-rippling to bottom half-inch of pages throughout book (no staining, and not bad enough to call it "damage"); fold-out color map tipped-in at rear endpaper in pristine condition; includes errata slip, tipped onto verso of frontispiece photo; additional illustration laid-in (see notes)]. (B&W photographs, figures, fold-out map) (Two volumes in one.) This edition of this massive and definitive work, with over 600 illustrations, was the first since the Fourth (in 1935) and thus the first to take into account "descriptions and illustrations of the developments in diving appliances during the 1939-45 War period and since." The front endpaper contains the property stamp of one "Fred V. Zendar, Deep Sea Diver," with a Santa Monica, California address; Zendar was a longtime Hollywood stunt diver, beginning with REAP THE WILD WIND in 1942. (You might remember that the highlight of that Cecil B. DeMille epic was an underwater battle-to-the-death between John Wayne and a giant octopus. Or was it a squid?) One of his credits (or I should say un-credits) was the 1954 Disney film 20,000 LEAGUES UNDER THE SEA, which might explain how this book came to be in the collection of that film's director, Richard Fleischer, from whose estate it was acquired. Laid in to this copy is an additional black-and-white illustration, "A Diagrammatic Impression of Underwater Activities," depicting 42 such activities in a single panel; folded in quarters, it opens out to a full size of 22-1/2" x 9-3/4". Although it's the right size, there is no indication -- on the illustration itself, or in the book, or in any bibliographic record of the book that I've been able to locate -- that this illustration was ever part of this particular book, so my assumption is that it was removed from a different book and placed here for reference. It's in good condition, with a few small edge-tears, some wrinkling and creasing (in addition to the fold lines), and one small stain.