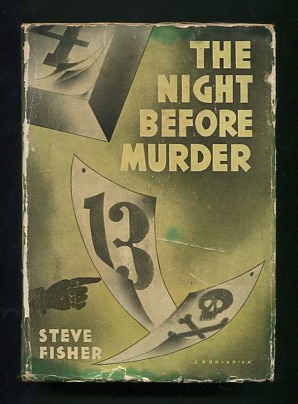 The Night Before Murder (A Clue Club Mystery)

[solid book with not much actual wear, BUT: (a) its one-time owner went absolutely bonkers with his ownership rubber-stamp, using it on all endpapers, the bottom edge, and a couple of other places; and (b) the dust jacket, heavily worn, is firmly glued down at the flaps]. Early mystery novel by Fisher, as he was still clawing his way up out of the pulps (his breakthrough novel, "I Wake Up Screaming," was just two years in the future), about a washed-up actress whose life "had become dull, barren and incredibly stupid, and [who] had become obsessed with the idea of death. So she decided to commit a murder!" Great opening line: "If Mrs. Rhea Davis had not been sleepless and miserable it is entirely possible that the idea of committing a murder would never have occurred to her." 1939 was also the year Fisher moved to Paris, although he soon returned after a couple of his stories were sold to the movies; he went on to a lucrative career or so as a screenwriter, while continuing to crank out novels on occasion, often with a Hollywood or showbiz background.

Title: The Night Before Murder (A Clue Club Mystery)

The Night Before Murder (A Clue Club Mystery)