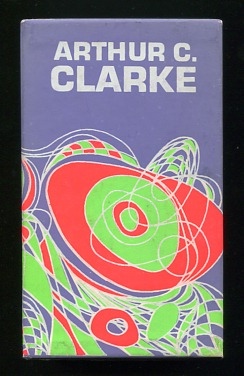 (five paperback books in slipcase) [books are uniformly tight and apparently unread, minor rubbing to the spine of one title, even more minor rubbing to the covers of a couple; the slipcase shows some light wear, but is completely intact (no splits, cracks, etc.), and has the original retail price sticker still affixed to the spine]. Mass Market PB Boxed set of five Clarke classics, no doubt issued to capitalize on his enhanced name recognition in the wake of Stanley Kubrick's 1968 film 2001: A SPACE ODYSSEY (with an appropriately day-glo "psychedelic" design). These were not specially reprinted for this set, but apparently just assembled out of Ballantine's existing stock; the printing dates vary widely, the latest being March 1967 ("Childhood's End," also the only book to reference "2001" in its cover design). Although a couple of the books are identified as "originals," in fact none of them is a first printing. The details: "Childhood's End" (Ballantine U5066; 7th printing, March 1967); "Earthlight" (Ballantine U2824; 2nd Bal-Hi printing, June 1966); "Expedition to Earth" (Ballantine U2112; 3rd printing, July 1965); "Reach for Tomorrow" (Ballantine U2110; 3rd printing, December 1963; "Tales from the White Hart" (Ballantine U2113; 3rd printing, November 1966). (The latter three are story collections, by the way.) None of these books is especially rare, but I doubt you'll find too many of the boxed sets around -- especially not looking like it had just beamed in from the Sixties, like this one.