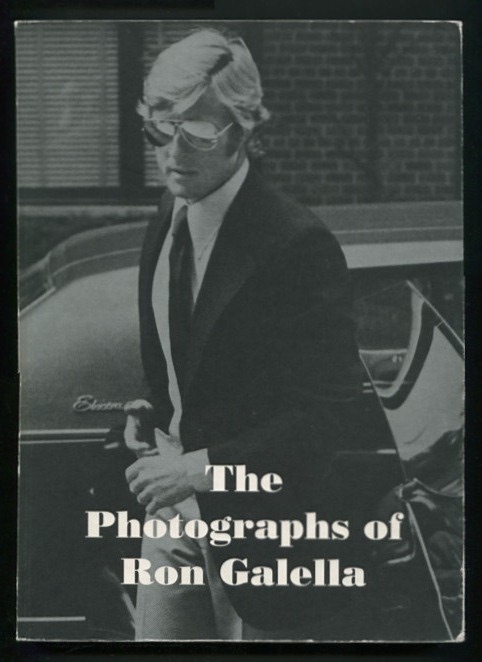 [covers are noticeably edgeworn, slightly dog-eared at corners, small remainder dot on bottom edge; otherwise a sound, clean copy]. Trade PB (B&W and color photographs) Nearly 150 photographs of the famous and once-famous, by the photographer who "helped pioneer the culture of celebrity watching as we now know it" (sez Tom Ford in the book's introduction, almost like that's a *good* thing). Generally regarded as the first of the modern-day paparazzi, Galella was "an opportunist and a daredevil" who spent most of the 1960s, 1970s and 1980s sticking his camera in the faces of people who didn't always welcome the attention -- most notoriously Jackie Kennedy Onassis, who famously sued him in 1972 to keep him the hell away from her and her children. (It didn't really work.) In addition to Ford's Introduction, there's a thoughtful and evocative Preface, so-called (which appears about one-quarter of the way into the book), by Diane Keaton, who speaks of Galella as "the Dean" and speaks from the perspective of someone who was herself a subject of his attention, and who also knew many of the others he photographed. Quoth Ms. Keaton: "Ron Galella has given us the true landscape of celebrity in the faces of the eminently watchable, not so mysterious, victims of Narcissus' kiss." The book also incorporates an interview with Galella, conducted by Glenn O'Brien. (The second edition was "limited to 4000 softbound copies.) ***NOTE: Additional shipping charges for this heavy book may apply for non-U.S. customers, or for Priority Mail shipping within the U.S.; if this causes you concern, please inquire before placing your order.***