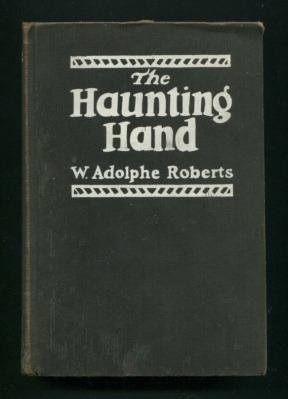 (no dust jacket) [Good only, a worn but intact book; spine turned, moderate wear with slight fraying to cloth at a few corners, top right-hand edge of front cover bumped, one-time owner's name on ffep, light staining to rear cover, spine lettering partially rubbed off]. New York-set mystery novel about a movie actress who sees a creepy disembodied arm and hand reaching out from under her bed one night, and spends the rest of the novel (with the help of many other characters) trying to figure out what the heck it was -- spook, burglar, figment of her imagination? By some definitions this could be considered a "Hollywood novel," insofar as it takes place partially against a film studio background -- the studio in question, the "Superfilm Company," being located in Astoria, N.Y. -- and is peopled with standard-issue stock characters of the genre: the egotistical and sexually aggressive director, the jealous star actress, the young love-struck cameraman, etc., all involved in making a film called "A Toreador's Love." It's also been claimed as the first mystery novel written by an African-American author, although the problem there seems to be that Mr. Roberts was neither African-American (he was born in Jamaica, of substantially-creole parentage) nor even especially dark-skinned, let alone "black" (as he's also been called). Oddly, too, it's not usually mentioned as being his first novel, although all evidence indicates that it was. (He had, however, already been professionally active as a poet and journalist for several decades prior to its publication, and had also written quite a bit of magazine fiction.)