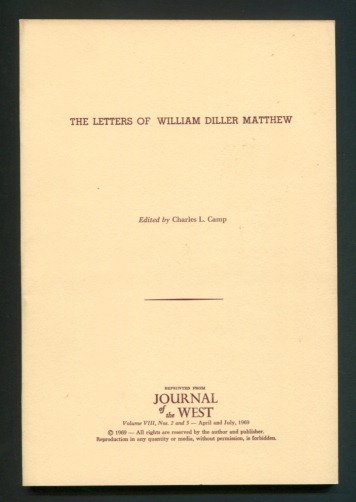 The Letters of William Diller Matthew

[nice clean copy, extremely light spotting to rear cover, no discernible wear]. (B&W photographs) A selection of letters from a noted paleontologist, written to his family while he was on various field research trips throughout the Western United States; letters are dated from 1897 to 1929. Dr. Matthew (1871-1930) was with the American Museum of Natural History in New York for 33 years, where he was named curator of the Department of Vertebrate Paleontology in 1911. He spent several years, later in his life, as a professor at the University of California, and ultimately his papers and books formed the nucleus of the Matthew Memorial Library of Paleontology, a part of the Geology Branch Library. (Reprinted from "Journal of the West," Volume VIII, Nos. 2 and 3, April and July 1969). 52 pages.

The Letters of William Diller Matthew