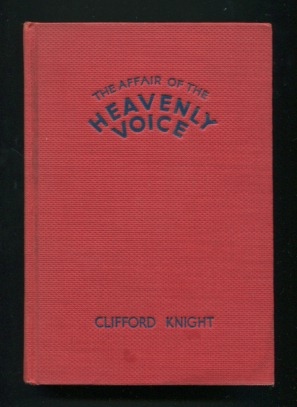 The Affair of the Heavenly Voice

(no dust jacket) [a solid book, very light wear at extremities, slight fading to spine cloth, minor dampstaining to bottom edge, colorful vintage bookplate on front pastedown]. "A hair-raising tale, set on a lonely headland of California, and solved by the same Huntoon Rogers," the "amiable but colorless amateur sleuth" (per Jon L. Breen) who debuted in the author's previous, Red Badge Prize-winning novel "The Affair of the Scarlet Crab," and went on to solve sixteen more "Affair" mysteries, mostly set in the American West or Southwest. The plot of this one concerns "a school for mystery writers operated by a burnt-out novelist in her palatial home on the California coast, [and] includes much discussion of detective-story construction." Anthony Boucher once described Huntoon Rogers's sleuthing technique as "sitting around for 70,000 words and then bluntly accusing a man who kindly confesses." It might be noted that although he lived and wrote primarily in Los Angeles, there is no record of a single one of his two dozen novels being made into a movie. Not that there's anything wrong with that. And maybe it's just because nobody wanted to pay a character named "Huntoon."

Title: The Affair of the Heavenly Voice

The Affair of the Heavenly Voice