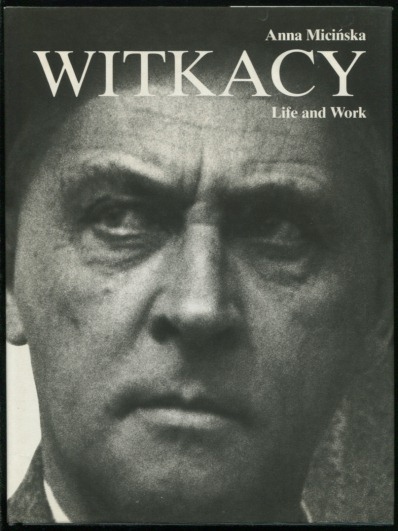 [book itself has no significant wear, but there is a longish gift inscription (non-authorial) in Polish on the title page; jacket shows just a bit of surface wear, still very nice]. (B&W and color photographs, facsimiles) Profusely-illustrated survey of the life and work of the dramatist/poet/novelist/painter/photographer/philosopher (1885-1939), who committed suicide when he learned that the Red Army had crossed the border into Poland. His immense and diverse body of work "was partly disregarded and partly underestimated by his contemporaries," not only because of its "new, difficult [and] disquieting" qualities, but also because he was apparently a bit of a goof, who was "endowed with an outstanding sense of humour, [and] largely disguised his personality behind this humour." Numerous photographs of him in the book attest to this antic spirit, which was also reflected in his adoption of the mononymous nickname "Witkacy." The book discusses his life as an artist and his theatrical work, as well as the development of his philosophy. In addition to reproductions of many of Witkiewicz's paintings and drawings, there is also a detailed chronology of his life, comments from many contemporaries, and an international bibliography of his writings and his major critical and academic works. (He was the subject of a 1985 biographical film, "Witkiewicz's Tumour," produced for Polish television.) The text of this edition is entirely in English, although the book also appeared in Polish and French.