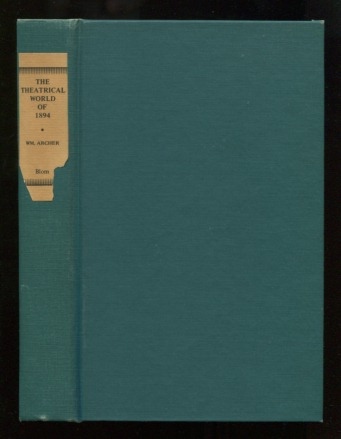 (no dust jacket, probably as issued) [nice sound clean copy, with just a touch of wear at the extremities; the bottom corners of the paper spine label have chipped off, but with no loss of text on the label itself]. Facsimile reprint of the original (1895) edition, which itself essentially reprinted the theatrical reviews from "The World" covering productions on the London stage during 1894. Preface by George Bernard Shaw; includes a "Synopsis of Playbills" for the year by Henry George Hibbert. Among the productions of interest: "Gentleman Jack," the British staging of an American play starring champion prizefighter James J. Corbett; Shaw's "Arms and the Man"; Ibsen's "The Wild Duck"; Sarah Bernhardt's season, during which she appeared in no fewer than six plays (including "La Dame aux Camelias"); and "The Professor's Love Story" by J.M. Barrie; and several Shakespearean revivals. The Christmas pantomimes are reviewed, of course, along with a whole host of forgettable (and indeed forgotten) musical farces, comic operas, duologues, burlesques, and at least one "mimodrama" (it was put on by "A French Company" and only played a week; maybe it's best we don't know any more). A sampling of titles will give something of the flavor of the theatrical world of the day: "An Old Jew"; "A Comedy of Sighs"; "Go-Bang" (Musical-Farcical Comedy in Two Acts); "Jaunty Jane Shore"; "Time, Hunger, and the Law"; "Little Miss Cute"; "A Trip to Chinatown"; etc. There are separate indexes for: Theatres; Plays; Authors; Actors; Actresses; Managers, Critics, Composers, &c. (The latter led me to an interesting discussion of Bram Stoker's attack on theatrical critics.)