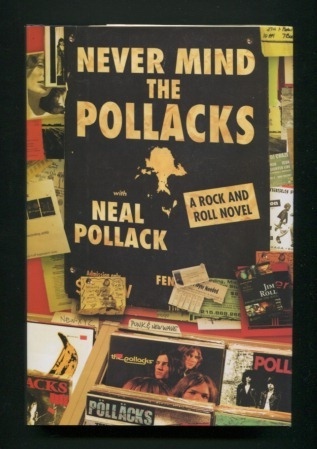 [nice-looking copy, just a touch of wear to bottom edge of book; another touch of wear to the jacket]. "A rock novel that really rocks," by the (jacket-blurb-proclaimed) "greatest novelist of his generation." An over-the-top satirical novel, "a raw, protean yawp from the depths of nowhere, a hilarious trip through time that savagely parodies the history of rock and roll and its grandiloquent journalism." The novel's narrator is a fictional rock journalist who is called upon to tell the posthumous story of a fictional "Neal Pollack," a rock critic who seems like a cross between (among?) Hunter S. Thompson, Sid Vicious and every opinionated, self-important, unsocialized asshole you've ever met and wish you hadn't. Like CITIZEN KANE, the story opens with its subject's death; all resemblances end right there.

Title: Never Mind the Pollacks: A Rock and Roll Novel