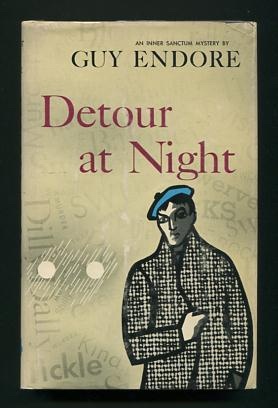 [pages browned as typical with S&S books of this era, otherwise just minimally shelfworn, with very slight bumping to top corners; jacket shows just a trace of soiling to the rear panel, very shallow chipping at top of spine]. Mystery/suspense novel about a hitchhiking former linguistics professor (now an accused murderer on the lam) who finds himself back in the very town -- Devon, Indiana (not its real name) -- where his troubles began. The novel is written in the first person, and while I won't be so bold as to call it "Nabokovian," I can't help but think that V.N. would have recognized a kindred spirit in G.E.'s protagonist, who seems to spend an inordinate amount of time musing on word origins, syntax, and so forth. A random example from page 60, where he goes off on a tangent about "reduplication": "And the history of such words! 'Mumbo jumbo' from an African tongue. 'Tohubohu' from Hebrew. 'Jimjams' from American slang. And 'pall-mall,' or 'pell-mell,' from an Italian game played with a ball and a mallet! And 'holus-bolus' from Latin. A universal phenomenon, reduplication." Endore was a lefty novelist and screenwriter, whose movie career pretty much ended after he was blacklisted circa 1950. (His last major feature credit was on the somewhat ironically-titled 1951 film TOMORROW IS ANOTHER DAY.)