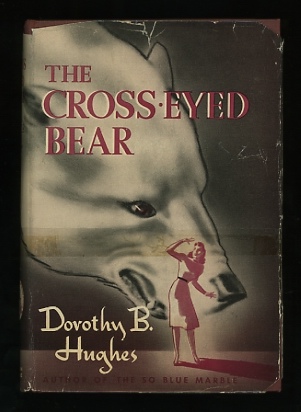 By: Hughes, Dorothy B.

(price-clipped) [spine turned, dampstain and minor surface scraping to rear cover, light dust-soiling to top edge, internally quite clean; jacket is decent-looking, but with two strange problems: #1, it seems to have been deliberately clipped just a tiny bit at all corners, and #2, there is a single strip of old clear tape (now somewhat yellowed) running horizontally from one flap all the way across both panels to the other flap; I guess this was intended as some weird form of reinforcement but in any case it probably can't be removed without doing serious damage to the jacket, so there it stays]. This underrated mystery writer's second novel, "the story of the billionaire known as The Cross-Eyed Bear, of the three sons he hated and of the three wives they didn't want. Although he had been dead for some years, before the events in this story took place The Bear -- so known because he was big and shaggy and cross-eyed -- was behind everything that happened. He had fashioned his will in a most peculiar form because -- he said -- of his three sons he wanted two to be murdered and one to hang." (Decidedly *not* the basis for that popular TV show of the 1960s starring Fred MacMurray.)