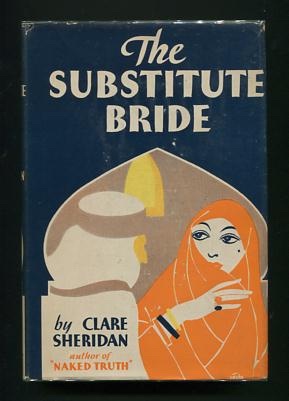 [nice tight book with minimal wear, slight dust-darkening to top edge, one-time owner's florid signature on front pastedown, and a neatly-clipped mailing label from The Ohio State Stove Corporation affixed to the ffep, also bearing the same previous owner's name and address; jacket shows a little wear at corners, minor chipping at top of spine]. "The story of a courageous modern woman who dared defend a Harem girl against the ancient and merciless marriage customs of Algeria." The author was a noted sculptor/journalist/bohemian, touted in the jacket blurb of her memoir ("Naked Truth") as "the most daring woman in Europe." A tireless traveler (often by motorcycle), she had taken up sculpture following the death of a daughter in infancy; after turning professional, one of her first important commissions took her to the U.S.S.R., where she executed busts of many of the important Revolutionary leaders, including Lenin and Trotsky. (She was also politically sympatico with the Bolsheviks, which caused her more than a bit of trouble with her prominent cousin, Winston Churchill.) She became an overseas correspondent for the New York World starting in 1922, and in the course of her travels she interviewed many prominent figures of the day, while also turning out a steady stream of books about her various adventures. She died in 1970 at the ripe old age of 84, having outlived both her children.