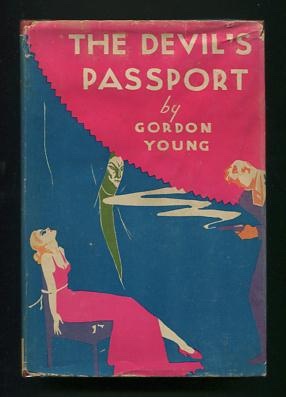 [light spotting to top page edges, otherwise a tight clean copy with just minimal shelfwear; jacket a little wrinkled at top of front panel, with some shallow chipping surrounding top of spine, a handful of other tiny nicks and tears, minimal paper loss at a couple of corners, water-stain along edge of rear panel]. Pulp adventure novel about a mysterious American named Don Everhard ("not his real name, you will understand, but a pseudonym which he adopted because nothing else fitted his suave, steely, direct personality"), a gun-toting gambler who lives "on the ragged edge of the underworld." In this yarn, he's recruited by government authorities to do battle against a French criminal mastermind known as "La Tête de Mort," who commands an international gang headquartered "somewhere in the foul depths of the Paris underworld." "High banking circles of New York and diplomatic offices in Washington" are involved, and "dramatic dialogue that has the staccato breathlessness of machine-gun fire," and transatlantic ocean liners, and God knows what else, all leading up to a dramatic face-to-face confrontation between Don and La Tête. One of three Hubin-listed titles by this author, who had written a series of "Don Sturdy" stories for the adventure pulps during the 1920s that are said to have influenced later hard-boiled crime-fiction writers like Carroll John Daly. (This novel, in fact, had been serialized in "Adventure" magazine in 1932.)