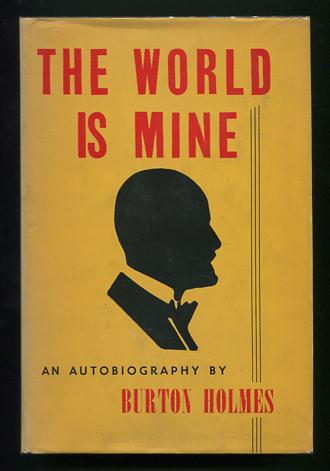 The World is Mine

(price-clipped) [moderate shelfwear to base of spine, faint smuding to top page edges; jacket lightly soiled, minor horizontal crease near top of front panel, shallow chipping at top of rear panel and a tiny hole in the spine, which is also a bit faded]. (B&W photographs) Autobiography of the noted world traveller, lecturer, photographer and filmmaker. 83 when this book was published, Holmes had only retired a few years earlier. In his life he crossed the Atlantic and Pacific Oceans each more than 50 times, and delivered somewhere in the neighborhood of 8,000 lectures. He began incorporating motion pictures into his presentations very early on (he is said to have taken the first films in Japan, in 1899), and later produced travel films (he invented the word "travelogue") for Paramount and M-G-M. A substantial portion of his film archive (some 200 reels) was rediscovered in 2004, has been preserved by George Eastman House, and can now been on YouTube and elsewhere.

Title: The World is Mine

The World is Mine