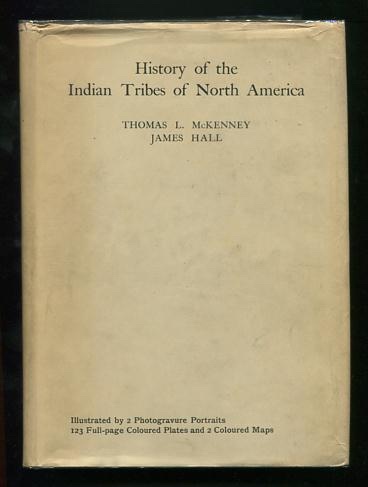 History of the Indian Tribes of North America; with biographical sketches and anecdotes of the principal chiefs [Volumes I and III only]

[just a bit of shelfwear and light bumping to bottom edges/corners, one-time owner's rubber-stamped signature on front pastedowns (both volumes); jackets are uniformly age-toned (somewhat more at spines), with general soiling and some wrinkling along the top edges, but with no tears or chips]. (2 photogravure ports.; 72 color plates; 2 maps) Regrettably incomplete set (Volumes I and III only; Volume II is not present) of this classic work, originally published in three folio volumes issued in 1836, 1838 and 1844. The introduction to this "New Edition," by editor Hodge, presents an account of the creation of the original work (including much biographical information about the authors) and an extensive bibliographical discussion of numerous editions that followed, in particular the history of the work's most notable feature: the color portraits of many Native Americans, primarily tribal chiefs. Because the portraits, which hung originally at the War Department and later at the Smithsonian Institution, had been painted from life (and predated the widespread use of photography), in many instances they represent the only existing images of their subjects; and because most of the originals were destroyed in the 1865 Smithsonian fire, only the published reproductions remain. This edition contained 123 color plates in all, of which 72 are present in the two volumes on offer, as are the two color maps, at the end of Volume III.

Title: History of the Indian Tribes of North America; with biographical sketches and anecdotes of the principal chiefs [Volumes I and III only]

History of the Indian Tribes of North America; with biographical sketches and anecdotes of the principal chiefs [Volumes I and III only]