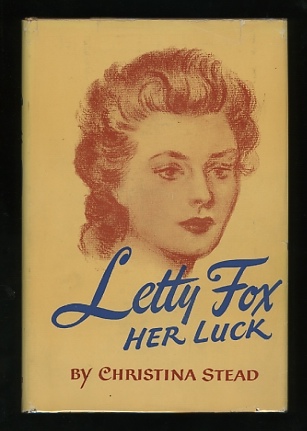 [extremely light wear to extremities and base of spine, tiny stain at bottom of ffep (also affecting the next couple of pages), one-time owner's embossed "stolen from" stamp on ffep; jacket has various tiny nicks and tears along edges, nothing very serious]. "A pretty young girl brought up to modern life in New York City, she was fond of comfort, active, and no dreamer. She went to progressive schools, knew too much too young, belonged to radical and aesthetic movements, cared for beauty, men, and money," etc. The Australian-born Stead's sixth novel, written after she had lived in the U.S. for seven years, has been called "a modern picaresque novel and psychological novel at the same time," and over time has achieved a better reputation than when it was first published. It was not well reviewed, and the sexual frankness of its heroine got the book banned for a time in her native Australia (but only there). According to scholar Nicole Moore, the book "was a succès de scandale, selling over 12,000 copies in the United States but marking a downturn in Stead’s critical reputation," as most critics regarded it as a sort of seedy romance (missing its satirical qualities altogether). Moore also notes that it "proved a complete failure in the United Kingdom, and provoked such hostility in Australia that its banning had some influence on Stead’s reputation in her home country for many years."