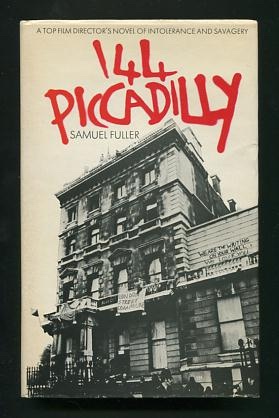 [slight age-toning to page edges, but no significant wear; jacket spine lightly soiled, slight scrunching at spine ends]. Novel about a group of London hippies who barricade themselves inside a decaying Mayfair mansion and resist all efforts to evict them. The much more common American edition rather obscures what the photographic dust jacket of this U.K. printing makes explicit, which is that this was based directly on an actual event -- "ripped from the headlines," as Fuller might have put it. In September of 1969 a radical group known as The London Street Commune, formed to highlight concerns about rising levels of homelessness in London, took over a large house at the corner of Piccadilly and Park Lane (just across from Hyde Park); they occupied the building for six days before being forcibly evicted by the police. Fuller's literary conceit was to insert himself into the situation, "playing" the narrator, a cigar-smoking American film director (in London for a BFI retrospective of his films, no less) who gets involved with the squatters by accident. Unlike most of Fuller's books, it's not just a novelization of one of his own film treatments; as he tells it in his posthumously-published memoir, he actually had been in London when the occupation was taking place, had witnessed the initial break-in while out on a late-night walk, and with his "newspaperman's nose," had contrived to have a chat with the occupiers. "The disheveled squatters invited me to stay on," he wrote, "[and if] I hadn't had prior commitments, a wife, and a flight back to the States the next day, I would have." He subsequently got "damn mad" about the treatment accorded the squatters by the British media and the police, and knocked out a novel in which "an American film director very much like me participates in an illegal entry in London, then tries to bridge the generational gap by becoming the group's mascot and witness. The fictional 'me' does what I was tempted to do but couldn't, abandoning his hotel suite for a mattress on the floor with the flower children." (Fuller does not, however, mention that he'd ever had any notion of turning this yarn into a film.)