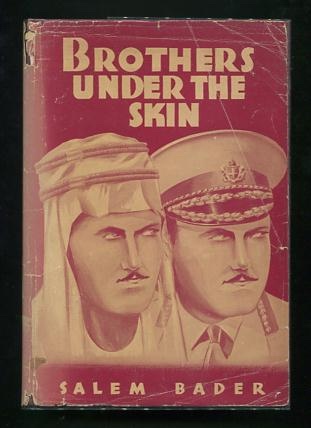 Brothers Under the Skin

[solid copy, minimal shelfwear, light age-toning to page edges; jacket missing front flap, edgeworn, ragged tears at top spine corners, a number of creases, a little fading at spine]. Historical novel set in the Middle East, against the backdrop of the last two decades of the Ottoman Empire (roughly 1908-1922). From the Preface: "This gripping narrative, woven around intriguing and authentic international happenings, unfolds in the most ancient metropolis in the history of the world -- Jerusalem, the cradle of Christianity, Judaism and Mohammedanism -- [and] then the story carries one into equally romantic surroundings, such as the Arabian Peninsula, Constantinople, Egypt and England." Moreover, it's stressed to be "important that the reader not construe the author to be anti-British any more than he is anti-Turkish, Arab, Jewish, German or French." Although the usual disclaimers are professed, no bones are made about the author's bona fides: "Verily, only a man who has lived in those locales and played a vital part in the history-making events," can write such a book. Bader, born in Jerusalem in 1902, at age 13 was purported to be the youngest agent of the British Intelligence Service, serving as a "spy, messenger and intepreter" between Lawrence of Arabia and the Bedouin chiefs. Captured at 16, convicted in Palestine by Turkish-German authorities and sentenced to be shot, he was rescued by Lawrence and his Arab allies. He moved to the U.S. in 1925, and became a citizen two years after this book was published; in 1953 he founded the United States Arab-Asian Institute, and was known as a prominent anti-Zionist lobbyist.

Title: Brothers Under the Skin

Brothers Under the Skin