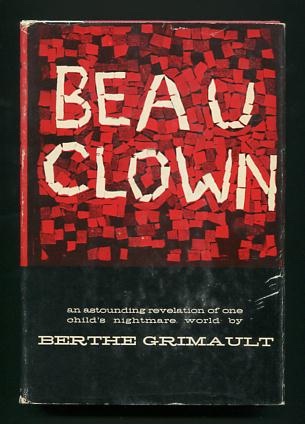 [very nice copy, minimal shelfwear, slight age-toning to pages but much less than usually seen in Rinehart books from this period; jacket shows a bit of wear at edges and corners]. Blurbed as "perhaps the most remarkable novel ever written by a child," this "astounding revelation of one child's nightmare world" was the creation of one of those youthful-literary-prodigy-sensations of the time, a barely-literate 14-year-old French farm girl who was able to get it down on paper with the help of a neighbor, Eliézer Fournier, who explains his contributions in an explanatory note at the beginning of the book. Based on her own experiences and on stories told to her by her father (who had spent some time in a mental institution), the book is an episodic account backgrounded against "the daily spectacle of poverty and promiscuity -- the extraordinarily primitive existence of the peasants," and involving prostitutes, American Negro G.I.'s, three escaped lunatics (including the title character), and her own "large (and unrestrained) family." (The New York Times reviewer called it "clearly the work of a highly unbalanced personality.") Mlle. Grimault was already at work, per the explantory note, on a second book, published the following year as "Tuer son Enfant" ("Blood on the Straw" in the U.K. and the U.S.), and was also offered a scholarship to a rather high-toned English finishing school, whose headmistress was supposedly shocked to discover that the young lady was "half-illiterate" (although it seems to me that that fact is made pretty clear in the introductory matter of this book). She was briefly a media sensation in the U.K. -- the "pig girl amongst the debs" -- and upon her return to France wrote (perhaps again in collaboration with Fournier) what would be her final book, "Berthe in Paradise," published in 1960 and described as a "surrealist fantasy" based on her experiences in England. And whatever finally happened to Mlle. Grimault, I wonder, who would be about 70 years old today?