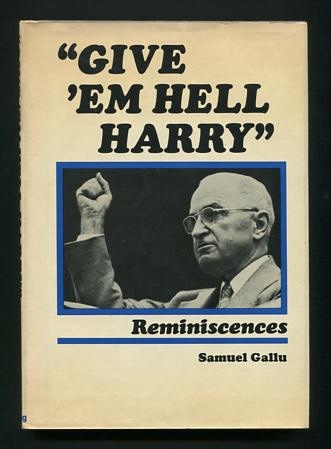 "Give 'em Hell Harry": Reminiscences [*SIGNED* by the playwright and actor Ed Nelson]

[minor shelfwear, slight fading to boards along top edge; jacket slightly age-toned, tiny tear at bottom rear corners]. (B&W photographs) INSCRIBED and SIGNED by the playwright on the ffep, a humorous inscription making reference to actor Ed Nelson (who took over from the original lead, James Whitmore, in the national touring company of the play); additionally INSCRIBED and SIGNED by Nelson himself, just beneath Gallu's inscription. The famous one-man biographical play about the 33rd President of the U.S., Harry S Truman, for which the playwright drew "upon material gathered in months of research at the Truman Library and upon interviews with friends, family, and colleagues of the late President," in order to present "an irresistible earful of Truman's own thoughts and comments on just about everything." James Whitmore was the original HST when the play premiered at Ford's Theatre in Washington, D.C., in April 1975, and took it on the road for a six-city tour, during which it was videotaped; converted to film and released theatrically, it earned Whitmore an Academy Award nomination as Best Actor. (He lost out to Jack Nicholson, who took home the Oscar that year for ONE FLEW OVER THE CUCKOO'S NEST.) By late 1975, with the Whitmore version still in theaters, Nelson had already stepped into the role on stage, continuing for several years thereafter; the date of the inscription in this book is December 6, 1975, although it's unclear who actually wrote that date. Highly uncommon signed, the more so with this combination of signatures. Signed by Author

"Give 'em Hell Harry": Reminiscences [*SIGNED* by the playwright and actor Ed Nelson]