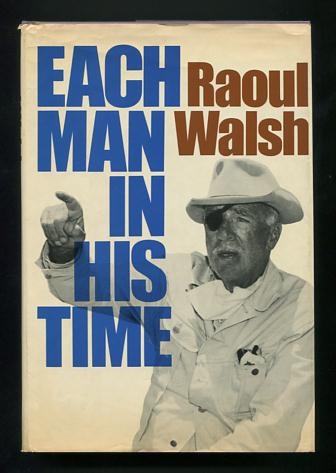 Each Man in His Time: The Life Story of a Director

(price-clipped) [spine a little turned, very slight fading to cloth along top edge; jacket a bit dog-eared at top of spine, moderate soiling to rear panel]. (B&W photographs) Rip-roaring memoir by the veteran director who began his career as an actor in the silent days (he played John Wilkes Booth in D.W. Griffith's THE BIRTH OF A NATION), but soon established himself as one of those "man's man" directors that Hollywood used to specialize in. (His career as an actor, which continued into the 1920s, was derailed when he lost his right eye in a freak car accident on location in Arizona in 1929.) He was just about the perfect "house director" for Warner Bros., where he spent much of his career and made enormous contributions to the drive and pace of studio product, particularly in the gangster and western genres, with films like THE ROARING TWENTIES, HIGH SIERRA, THEY DIED WITH THEIR BOOTS ON, DARK COMMAND, WHITE HEAT, etc. (The writing of this memoir, as well as William Wellman's, which appeared the same year, seems to have been prompted in part by the directors' participation in Richard Schickel's 1973 documentary/interview series "The Men Who Made the Movies.")

Title: Each Man in His Time: The Life Story of a Director

Each Man in His Time: The Life Story of a Director