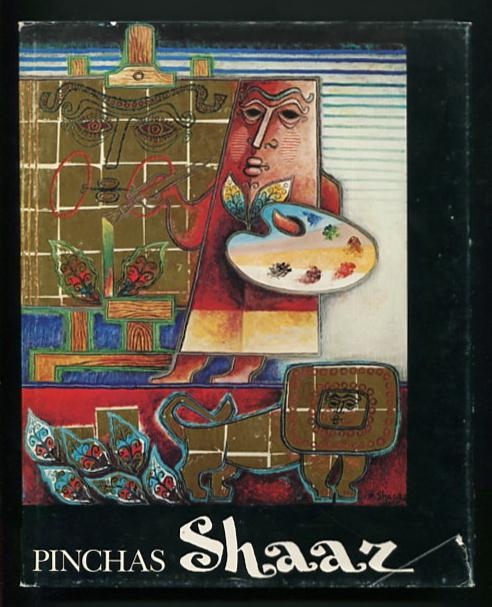 [book has no discernible wear; jacket is moderately rubbed/scuffed, a little dog-eared at base of spine, with a short tear and associated diagonal crease at bottom right-hand corner of front panel]. (color and B&W reproductions) INSCRIBED in 1993 and SIGNED by the artist on the second front endpaper; apparently it was "re-gifted" by the original inscribee, as a line has been drawn through his name and another name added above it (in a different hand). A catalog of the work of this Polish-born Jewish artist (1923-1996), who spent part of World War II in a concentration camp; following the war he studied in Munich and Paris, and began his career as a theatrical set designer. He moved to Israel in 1956, but later relocated to Paris, and then to New York, although he is usually identified as an Israeli artist, and his work is a phantasmagorical exploration of Jewish culture and mythology. (Laid into this copy of the book is his business card with an address in New York City.) The book itself is undated, but the second essay (by Marcel van Jole) provides a good deal of biographical information, and indicates that he was living in New York at the time of its publication. Further helping to fix the date as the early- or mid-1980s, the book includes a list of group shows he contributed to and of his one-man exhibitions; he seems to have had about one solo show per year beginning in 1959, and the latest date of any listed event is 1982. The text of this edition, by the way, is entirely in English. [As a side note, and a rather sad testament to Booksellers Not Paying Attention, fully two-thirds of the copies of this book currently listed for sale online are catalogued incorrectly, with the author's surname rendered as "Shaaz"; it does sort of look like that on the front jacket panel (an ill-advised font choice, essentially), but everywhere else (including the jacket spine!) it's very clearly printed. Colleagues: do better!] Signed by Artist