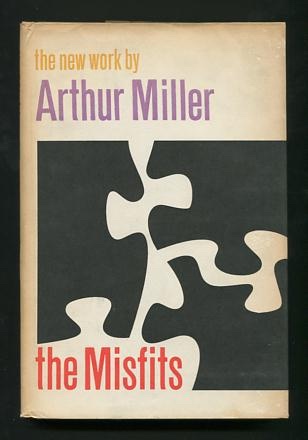 [bumping to base of spine, otherwise a tight clean copy with no significant wear; jacket browned at edges and spine, as typical with the book club issue of this title, but otherwise quite nice with only slight wear]. (4 B&W film stills) Novelization (kinda) by Miller of his own screenplay, which itself had "evolved" from his short story of the same name (also included in this volume), first published in Esquire in 1957. The jacket copy dubs it a "cinema-novel," and in his "author's note," Miller describes it as being "in an unfamiliar form, neither novel, play or screenplay," and states that his goal had been "to create a fiction which might have the peculiar immediacy of image and the reflective possibilities of the written word.'" In other words, he didn't really know what the hell he was doing, and it shows on the screen. The film, directed by John Huston, is like a cinematic train wreck -- simultaneously awful and fascinating, the latter at least in part because of our knowledge that its principals were doomed: Clark Gable didn't live to see the film's release, Marilyn Monroe did but died before completing her next film, and within five years the haunted and damaged Montgomery Clift, too, was dead, at 45. If watching this movie doesn't depress you, in one fashion or another, then you are incapable of being depressed. Includes 4 photos from the movie.